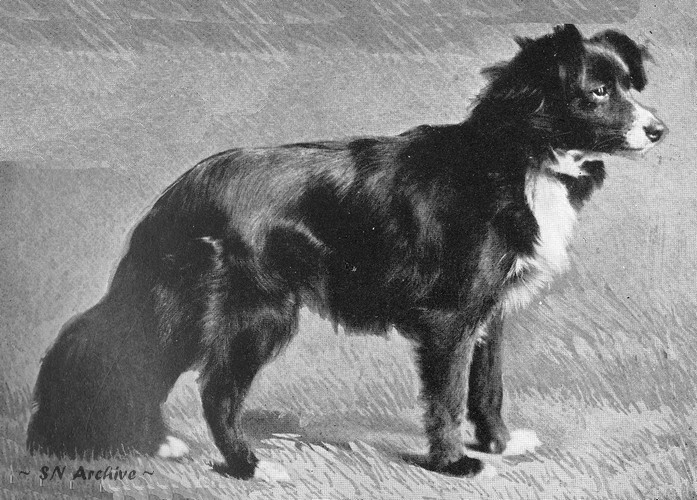 "Some 22,000 carefully bred pedigree dogs were registered at the Kennel Club in 1921. During the same year 600 separate dog shows, under Kennel Club rules, were held throughout the United Kingdom, and there are no fewer than 303 specialist clubs exclusively devoted to the welfare of particular canine breeds." These are the words of Robert Leighton in the preface to justify another general dog book from his pen. In Capter VIII - Pastoral Dogs - he wrote about SHEPHERDS' DOGS - THE SCOTCH COLLIES - THE OLD ENGLISH SHEEPDOG - CONTINENTAL SHEEPDOG - THE ALSATIAN WOLFDOG and the SHETLAND COLLIE. Over two pages about our breed! The book includes a photo of the black and white Sheltie bitch Wishaw Myrtle, *17.09.1912 owned by Miss M. Grey.

Page 112 - 114: Shetland Sheepdogs. - In the islands of the Hebrides, Orkney and Shetland, where the sheep are diminutive in size compared with the Cheviots and Leicestershires of the mainland, a large herding dog like the Collie or the bob-tail has not been desirable, and in the more northern archipelago the Collie has been so much reduced in size by selective breeding as to have become a miniature edition of he original rough-coated sheepdog of Scotland. In Shetland many years ago I remembered to have admired these active little Collies busy at their work of rounding-up their fleecy charges on the open pastures or driving them quietly and without undue excitement into the shearing pens. In winter, when grass was scarce, a small flock would be taken over to one of the outlying holms to feed on seaweed, and left there in the responsible care of one of these dogs, visited only occasionally by the shepherd.
In Orkney, on the pasture lands round about Scapa Flow, and especially on the island of Hoy, such miniature Collies were frequently to be seen a generation ago; but in later years they have been more closely associated with the Shetlands, where they are locally known as the Toonie Dog - a name derived from their work of guarding the croft, or farm town, and driving away the sheep that come uninvited to feed by stealth on the winter storage of fodder and root crops.
North Sea fisherman and other visitors brought specimens of the breed to the mainland to keep as pets, and I have seen more than one in the seaports of East Anglea. It was from a Lowestoft fisherman that Mrs. Feilden got a brood bitch whose puppies were afterwards shown at Cruft's. This was before Shetland Sheepdogs were recognized by the Kennel Club as a distinct variety. [Note M.F.: The offspring of Mrs. Feilden's bitch were exhibited at Crufts 1910.]  Perhaps the first important show at which classes were given was that at the Waverley Market in 1910, when several typical ones were exhibited. Mr. J.A. Logan had a fine team, I remember, including Lerwick Jarl and Lerwick Vera, both black and white. I forget the colour of the Countess of Aberdeen's Lerwick Olaf, but her Aberdeen Nellie was a lovely little sable bitch, like a Scottish Collie of the best kind seen through the wrong end of a telescope. Mrs. Rose's Kilravock Pride was a showy sable and white, as also was Mr. W. Bullock's Shetland Balta.
At Cruft's in 1913 an especially nice tricolour puppy named Jason was placed high above Lerwick Jarl; but by far the sweetest Sheltie on that occasion was a sable and white bitch named Zesta, who was unquestionably the finest specimen and the nearest approach to the ideal standard. A later dog, Woodvold, was a remarkable good tricolour, and Wallace was a beautiful sable. These have been followed, but not necessarily excelled, by Chrichton Olaf and Clifford Sharper, Miss M. Grey's Wishaw Myrtle, and her home-bred Pat, Peat, and Hurly Burly, Miss B. Thynne's Walesby Select, and others which have added distinction to an innately charming breed.
The Shetland Sheepdog is a sturdy, altogether admirable little dog, most attractive in appearance, and possessing all the wisdom and sagacity of his larger relative. He is in no sense a toy dog, but in all essentials a reduced replica of the big working Collie, even as the Shetland pony is a small copy of the shire horse, differing only in bulk and weight. In the south he is kept as a very engaging companion and is not expected to do the work of a shepherd's dog; but he ought to be judged with an eye on his fitness for working among flocks and herds.
The usual weight of a Shetland Sheepdog is from 12 lb. to 14 lb., the dog being of smaller size than the bitch and the height is about 12 inches at the shoulder. The body is long and set low on rather short legs which end in long-shaped, feathered feet. The tail is a substantial brush, beautifully carried, and the coat is long, flat, and inclined to silkiness, with considerable neck frill. The grooming should be in all details similar to that applied to the larger show Collie. There should, of course, be dense undercoat.
Perhaps the prettiest of the breed are the black and white with tan markings; but the sable and white are equally tycipal, as also are the simple black and white and the blue-grey. The markings are distributed as in the relative breed, generally with a white collar and frill, white legs and feet, and a white tip to the brush. The white muzzle and blaze up the foreface add distinction. The head should not be so long or the face so aquiline as that of the large Collie. The eyes are well proportioned to the size of the head, inclined a little to the almond shape, and they have a singularly soft round brightness, reminding one of the eye of a woodcock. The ears are by preference half-pricked, somewhat large, but not floppy, and they have a good amount of feather about them. I some specimens the ears resemble those of the Belgian Papillon dog, and are spread out like butterfly wings; but this is not a Collie ear, and all points which depart from the true Collie appearance and character should be regarded as incorrect."