Photos and details of individual "Shelert" dogs can be seen in the database "Sheltie Pedigrees (verif.)".

"... Before owning Shelties Miss Joan had bred rabbits for a numer of years, ..."
"... Miss Beryl owned Chows, keeping only one at a time as family pets, ..."
"One of Miss Joan's friends owned a Sheltie, and she 'fell in love with this small dog - because he was so sweet', which made her decide to search around for a Sheltie of her own. ..."
"... in 1945 Miss Joan managed to purchase her first Sheltie dog, 'Jasper of Melvaig', from Mrs. Kathleen Carlton, a dog who very nearly died of hardpad, and was left very delicate but who was shown, and won first prizes.
Having now got the Sheltie bug they purchased a further two dogs but even at this stage had not considered breeding. ... The smaller dog was 'Lyric of Melvaig' who went on to win 2 C.C.s and about 8 Reserve tickets."
"... Misses Herbert decided to obtain a bitch and start breeding: they book one from their friends the Misses Rogers, ... This bitch was by 'Ch. Helensdale Ace' and out of 'Ch. Riverhill Regale' and she eventually became 'Ch. Riverhill Royal Flush'. The Misses Rogers passed on all their Sheltie love and knowledge of the breed and to this day the Misses Herbert are truly grateful for all this information.
Looking at their early successes, 'Symphony of Shelert' was born on October 1st, 1955, and although she was eventually a Champion, the first Champion bred by the sisters was 'Midas of Shelert', born 22 days later than 'Symphony', on 23.10.1955."
"... It was 1964 when the first Blue Merles were bred at Hilltop. ... the first 'Blue' litter was born to a nice 'Tri' bitch which was on breeding terms with Miss M.N. (Peggy) Ure. ...
After careful thought and consideration 'Ch. Kinreen Blue Kestrel' was the dog which they decided to use, and from a very good mating the result of the litter was the Merles 'Scarcely Cricket at Shelert' and 'Such a Surprise at Shelert' - both were lovely colours and both winners in the Show ring."
"... By the way, if you haven't worked out the formula for 'Shelert' the 'Shel' is from Sheltie and the 'Ert' from Herbert.
... it was 'Shot Silk of Shelert' which became the apple of Miss Joan's eye, as she has always favoured bitches. ... Miss Beryl's favourites are dogs, and here both favour 'Champion Midas'. It is an interesting point that 'Midas' was hand reared and as most of you will know, was one of the most outstanding Sable and White Shelties bred in this famous kennel. ..." *1)

Above excerpts/quotes from the following books/articles/adverts: 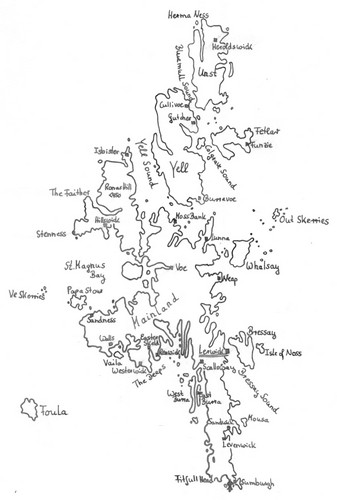